Spanish melody, indie rock sensibilities, a fluid and extremely interesting instrumentation, and a compelling live performance. These are things that Montoneros have going for them very well, and these are the things that complete them as a band making music live.

I first saw Montoneros when I was traveling earlier this March with a band called Revivalist. I was conversing with Ian of the excellent powerviolence band Bone Rot. We were discussing music and what he enjoyed hearing before going on stage to get him in the mood for his band’s chaotic set when Montoneros came on. We both stood in a sort of quiet as we listened to this band melodically tear through song after song of winding, extremely pleasurable melodic rock music, with Ian commenting that this was great, especially as a build up to the hardcore later in the show. What made it even better was that the band gave out free CDs of their record “If You Think You’re in the Wrong Place, You’re Probably Here” to anyone who wanted one, letting everybody have a piece of the band’s music for free.

I took home one of their discs and popped it in to listen. The powerful melodies that are so evident on stage translate well into the recording, making the listening experience very pleasurable. The build of the songs is great, with the drums, two guitars, and bass working off of each other while at the same time constructing great riffage and musical syntax independently. Every track displays this, but really the examples of this are “Big Wet Garden, “Zapata,” and “U-571.” 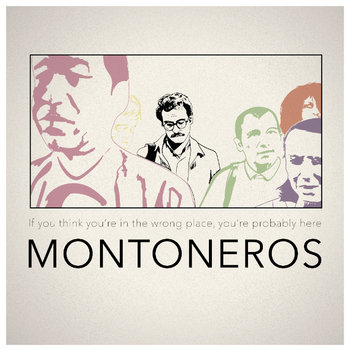 Lyrically the album makes for very interesting listening, especially where the differences in dialect are concerned. Like their name, a reference to a left-wing anti-fascist guerrilla group from Argentina, the band has many Spanish influences, with the actual usage of Espanol in their music an obvious indication as to where they pull from in terms of culture and musicality. “Como Yo” is almost entirely sung in Spanish, with the instrumentation being arranged in such a way as to allow the vocals to be illuminated in kind. This makes for an artistic depth not typically seen when it comes to punk/indie rock bands of today, indicating a very serious level of work and style evident in Montoneros’ repertoire.

These songs have a particular style of spunk and affluence in their sentiment, and the way in which they communicate their pleasure and meaning help to illuminate the musicality they represent (ex: “Jade”). Montoneros have really hit it outta the park here with “If You Think…”, making an album filled so much with interesting instrumentation and skill for songwriting that immediate enjoyment and excitement for this band’s progress are nearly guaranteed upon a single listen. In fact, I enjoyed the entire album too much to give a “Top Tracks” section, so I ask that you visit Montoneros’ Bandcamp and support this group.

Get their jams on iTunes or Bandcamp.