Legacy is a strange thing within the vast spectrum of music and the surrounding experiences it proposes. It can haunt, possess, or, in the case of those safe, kind and lucky enough, greatly bless those who inherit one. Indeed, the history of the band can, from a socio-historical perspective, be almost as influential as the music a band produces. 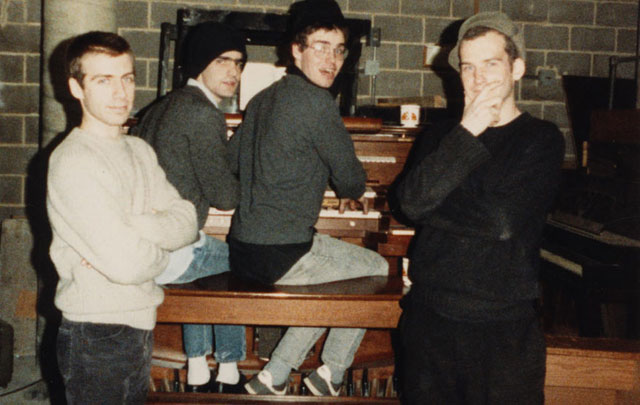 Fugazi has the regally blessed legacy that other musical groups hallucinate of.

In their twenty-six years of existence the band traveled to every continent and put out six full-lengths and multiple EPs. Their voracious touring habits and equally tenacious ethical ideals, including a vehement anti-record industry stance, virtual media blackout (especially MTV) and only playing all-ages shows, led to their gaining a serious underground following and breakthrough into the general cultural conscious even though they never even sold tshirts.

Though the band went on an indefinite hiatus in 2003 Dischord Records, the record label owned and operated by singer/guitarist Ian MacKaye, has recently released the band’s first demo for sale.

First Demo is a collection of tracks, with the exception of the previously unreleased “Turn Off Your Gun,” before they made it onto any Fugazi record. The work reads and listens like a Henry Miller or Herman Melville manuscript: excellent in its base line thought with the wonderful expressionist tendencies still waiting to be trimmed down for the final production.

The record is filled with nuances of Fugazi’s jam-based substance, with MacKaye’s original statement of having a band “like the Stooges with reggae” ringing true throughout the record, especially on the song “Joe #1 (instrumental).”
Throughout this work the listener finds an incredible sense of patient urgency, a refined feeling that stems from the band’s primary interest being in making music together, not so much the aspects of “band life” that so often cut a music group’s creativity before the fetus has any sense of cognition or serious claws. The obvious assurance here is that they had both, with the creativity and claws only growing as the entity that is Fugazi moves presently into legend and lore.

Buy it with real monies (not Bitcoin or Monopoly currency) at Dischord Records.

Merle Haggard: An Okie From California

Escape The Heat With Music