Music that comes from solitude is like no other kind, and this is exactly what that The Isolation Tapes presents in their self-titled release. Written over the course of a year after five days spent in a cabin in Australia, the record conveys powerful emotions that can only be seen and understood by dredging up the feelings one experiences while being alone for extended periods of time. 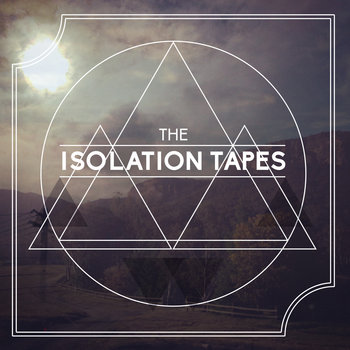 The EP winds its way through an explanation of the writer’s thought process and spiritual condition, bringing about a certain sort of passion rarely heard elsewhere.

The introduction in “92 Days of Sombre” opens with a call to arms, a motioning for meditative attention, and leads the listener through some whispered words with regard to the song’s title.

“Like Autumn Leaves” is a good track if one wants to take a piece out of the best of the album. Whispering guitar strings and violin are laced under the thicker tone of the singer’s vocals, providing a balanced whole that is beefy enough to carry the song through to contrast the airy nature of the light strings.

“A New Man” is the most straightforward track on the record. With a vocal style that is a bit more conventional and words more distinct, this is the song I had the hardest time deciding on. While it’s good for sure, the vocals seem to teeter on a sort of Creed-ness that nearly frightened away the legitimacy of the atmosphere. While the track as a whole did not collapse because of this, it was detrimental to hear within the general flow some of the discrepancies in regards to vocals. However the song more than recovers, bringing the interesting elements of the prior tracks to a head.

“Brood” is another call, like “92 Days of Sombre,” to attention, drawing the listener even closer into the work, acting as a secondary beacon alerting those within proximity to the power to be drawn from. This works not only for this specific song but for the album as a whole: the greater artistic work is expanded upon deeply by this instrumental track. This sort of arrangement of sounds brings much greater depth to the release.

“Down that Road” is a stylistic repeat of “Like Autumn Leaves” in combination with “A New Man”: light guitar picking and a violin bring the vocals into a warm, well mastered mix that invites one in to sit and enjoy the time in the longest track on the record, an excellent finishing touch to a really great set of songs. The build is excellent here, allowing the tracks previous to lend their elements to a passionate, disparate amalgamation of noise and wind that builds rather than collapses the motions of the music.

Released on the excellent Art As Catharsis Records, this EP is something special to dig into. It’s short but powerful in its meanderings and explorations of humanity in aloneness, and it conveys the sense that all is not lost; the process of being remade is open to those who are willing to take on the isolation.
Buy it on the record’s Bandcamp page for name-your-own-price or on iTunes.